After five years of growing enthusiasm for this project we finally realized that we were on to something and have started an organization. Visit our website at oaktreecollective.org and see photos of our work at Bonnaroo 2013 via instagram at http://instagram.com/oaktreecollective 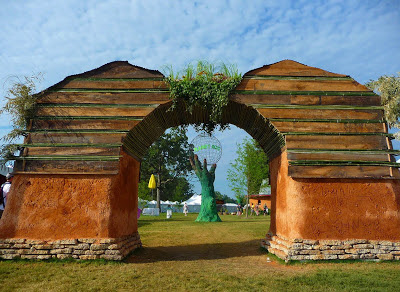 The idea for a grand entrance to planet roo had been tossed around for a few years. Design criteria included the use of locally sourced natural and reclaimed materials, a variety of finishes and textures, and plants growing on top. We decided 2013 was the year to build the arch early on, but the specific design didn't evolve until we were on-site and discovered what materials were around to work with.

The arch sits on a foundation of reclaimed concrete slab. This masonry footing was fast and easy to build and the materials were gathered from a broken driveway on the farm. Next, an armature was framed with random lumber scrounged from around the site. This skeleton was covered with various materials, including cob, which is an amalgam of site soil, sand, and straw. Cob is a load bearing structural material, but for speedy building, we simply attached a few inches of cob "venner" to the arch framework via wire fencing.

The top of the arch is finished with rough cut oak boards and local bamboo. To cap it off and complete the look, a variety of living, breathing, plants were perched happily on top. The piece became interactive, as "Rooers" touched, carved, and wrote in the fresh clay plaster. Some festival goers enjoyed the experience of pitching in with re-plastering throughout the weekend as we continued to refresh the surface with new mud.
Posted by Michael McDonough at 8:58 PM No comments: