With the turn of the new year I'm encouraged by ever expanding interest in ecological building. There is clearly a surge of interest in building small, and using local, minimally processed materials. It's exciting! I'm looking forward to documenting the projects of my colleagues and I on this blog as the year unfolds.

The 2013 workshop schedule will be posted in the next few weeks, so check back. We are offering multiple workshops in Durham/Chapel Hill, and likely other locations including Tennessee and New York's finger lakes. 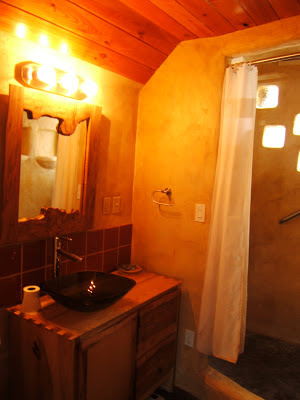 This photo was taken in the house we built in Durham and it's one of the best pictures I took this year. I feel like this photo captures the building's warmth and cheerful feeling.

The bathroom's walls are finished with a lime plaster, which is water resistant, tough, and has a charming hand made texture. lime can be used over various substrates, and in this case it's the final layer on a stud, lath, and plaster wall.

The ceiling is tongue and groove pine, and the shower is ferrocement. You can read about building the shower in detail in an older post on this blog.

Posted by Michael McDonough at 11:18 PM No comments: