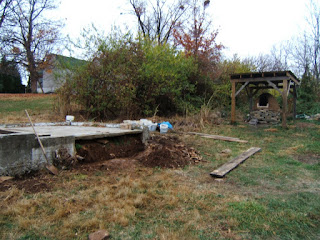 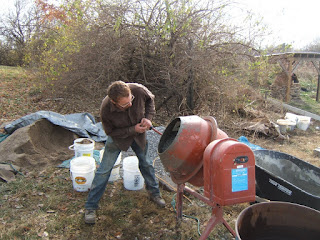 After months of scheming, planning, and mostly being occupied by other responsibilities at work, I've finally begun actual work on the outdoor kitchen at Oxmoor Farm. Last Friday with the help of Kitty and Adam, I poured the footing for the foundation repair. 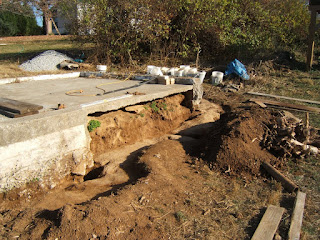 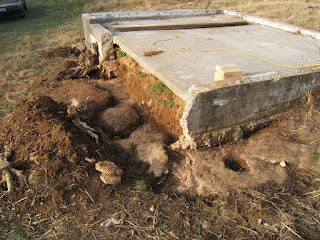 You can see that the foundation rests on bedrock, which is limestone here in central KY. The channels and holes in the stone were created by both water and plants. Limestone is primarily calcium carbonate and is soluble in slightly acid conditions, such as groundwater. I had to root out three large honeysuckle bushes that had grown out of the foundation, and were likely the cause of it's damage. The roots twined down the channels you can see in the picture and dove down through tiny cracks in the stone, secreting organic acids which dissolve the limestone and allow the plants to absorb the minerals. 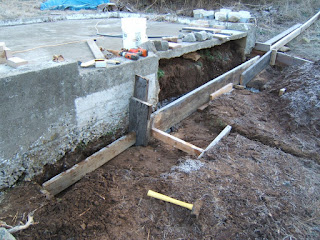 Securing the forms was a little challenging because the extra thin topsoil made it impossible to drive stakes in the ground. I had to brace the forms with the dirt I excavated, and luckily it was enough support. 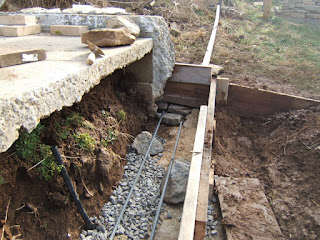 The straight form boards left gaps between themselves and the bedrock which I filled with stone and packed soil outside the form to prevent concrete seepage. I also installed a drainage system towards the inside of the wall to get rid of water that may build up inside the wall. 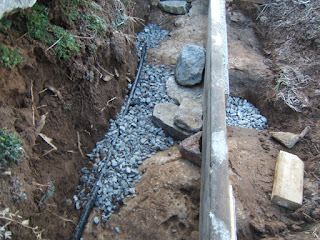 Here are Kitty and Adam, helping with the pour while I ran the mixer. 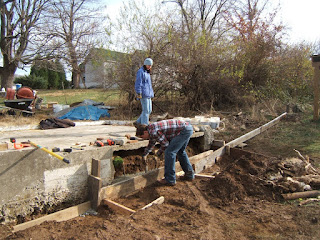 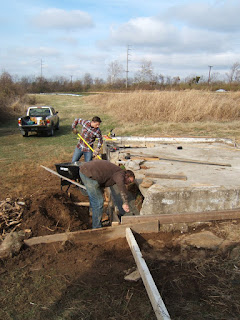 After the concrete was placed, I let it cure for a few hours and touched it up with a steel trowel. I stuck in some rebar, roughed up the surface to adhere to the next pour, scratched the date in a section that will be exposed, and covered it with plastic and straw because the forecast called for freezing temperatures. Concrete can't be allowed to freeze for some time after it's poured, but I think it will be ok because it's in contact with the ground which hasn't frozen, the curing of concrete is an exothermic chemical reaction which creates heat, and it's covered in insulation. Stay tuned, I hope to complete the concrete work this week, if the weather get's out of the 20's! (it should be in the 40s by weeks' end) 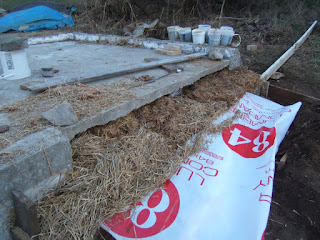 Posted by Michael McDonough at 8:04 PM No comments: