I haven't posted in over a year, so I suppose an update is due. I've done some building since my last posts, although I don't have pictures of much. I worked on the foundation and framing of a strawbale building in rural Kentucky, did some residential remodeling, and re-plastered the strawbale at Bonnaroo. One thing I have pictures of is the cob oven I built this summer on a farm. It's my first one and I'm pretty happy with how it turned out. It functions really well, and I've enjoyed a number of great meals with elementary school students, who visit the farm on field trips. Best pizza in Louisville. 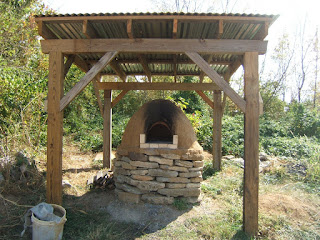 The oven is at the site of my next project, the outdoor kitchen at the Food Literacy Project, located on historic Oxmoor Farm in Louisville, Kentucky. The materials for the oven were completely free. I salvaged the lumber from an abandoned arbor. The clay and stone were taken from the site. gravel and sand were found in small piles outside a barn, covered in a few years growth of pokeweed and thistle. I used loose straw from the barn floor in the cob and dried grass in the plaster. The fire brick was taken from an earlier attempt at an earthen oven that was built a few years ago and never really worked. Metal roofing and screws were donated by home depot, along with 6 bags of quickrete, but didn't end up using it. I tamped the posts in gravel to facilitate drainage.

I am about to begin building a post and beam outdoor kitchen on an old foundation about 6 yards from the oven, I'll upload some pictures soon.
Posted by Michael McDonough at 7:48 PM 1 comment: